Bouncing A $17 Billion Paycheck For Freedom 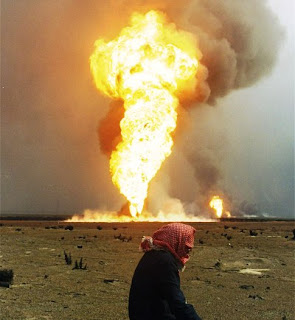 In 1991, the US and our coalition were paid by $17 billion by Kuwait for war efforts that freed the country of from Iraqi occupation. The monarchy was reinstated, and after 2 years and $50 billion of infrastructure expenses, the country bounced back into prosperity leading the Arab nations in educational and economic statistics.

Today, while sipping on a Tecate in the Townhouse in Venice Beach, California, I told my good friend from Kuwait the story of Paul Revere.Â  It’s a story most American’s studied in early childhood.Â  I recently read about how the famous midnight ride was a prime example of the importance of “connectors” in our society.Â  (The Tipping Point)

I grew up listening to punk rock and always wanted a cause to fight for, but never really found it.Â  Today, instead of anti-establishment melodies and lyrics, I play flamenco renditions while rapping and parody singing R&B songs.Â  I consider the defect of my musical activism embarrassing, yet honest.Â  But on this 4th of July weekend, anticipating the arrival of my best friends visiting LA before I migrate inland to one of the former largest slave-trading city in US history, I have allowed myself to be impassioned with rebellious stories of other nations.

It’s the 5th richest country in the world, with 10% of the world’s oil reserves.Â  The country has a 94% literacy rate, and the median gross income per capita is almost $100k.Â  2/3 of the country is made up of foreigners, however, and 90,000 people have been banned from leaving the country because of debt issues outlined in the constitution.Â  The recent budget passed by the government has a $14 billion deficit, with almost half of the $56 billion expenditures exhausted on government salaries. Â  The country needs to sell over 1 million barrels of oil a day to pay these salaries. Â  More than 1/4 of this budget is for subsidies, ‘which guarantee low prices for fuel to power plants, petrol and other essential commodities.’Â  8.5% of the budget is for defense spending, while $3.8 billion was spent on a “one off payment for government pension.”Â Â  Almost 90% of the country’s revenue comes from oil, and 10% of this revenue is allocated to the’countryâ€™s sovereign wealth fund, whose assets are estimated at around $277 billion.’Â  That is decent chunk of change.

Despite the reserves, The liberal movement seems to be fighting for a future.Â  With a finite supply of oil, it makes sense to The Hyderabadass for this country to diversify.Â Â  They are effectively paying their government salaries with oil money that will eventually run out.Â  Then what?Â  How many pearls need to be dived for to pay the $25 billion salaries?Â  Where is the incentive for people to work in private industries if government salaries are so inflated.Â  $300 billion will run out very fast in a country that spends $56 billion a year, and any cuts made will certainly effect the lives of the majority of people depending on it.

All people, like the colonists that Paul Revere rounded up for the American Revolution, respond to incentives.Â  Even the most complacent person may resist control from authorities when certain liberties are taken away.Â  In general, I believe that people tend to have a strong interestÂ  for the freedom and rights of their children, regardless of their interests into their own individual futures. Â  In Kuwait, government salaries have tripled in recent years, yet today 50,000 people protested this violation of a person’s freedom of speech.Â  There are less than 1 million actual citizens in Kuwait, with less than 40% eligible to vote.Â  It seems like the injustice of a particular individual being imprisoned for a speech is providing incentives to a nation for a much needed reform.Â  Today there are 1.6 billion people in the world living without electricity.Â  Perhaps its time for this oil rich nation to see a light at the end of their tunnel and build a sustainable society that continue to prosper in an everchanging global economy.Â  Just this week, Tesla, an electic car company went public with a very successful IPO exceeding a $2 billion stock market value.Â


In conclusion, I am very interested in seeing what happens from here.Â  Will the prime minister continue his stance at punishing his critics?Â  Will the courts support it?Â  Will the people unify and form an opposition?Â  What’s the prince up to during all this?Â  How long will Khalid Al-Fadhala stay in jail?Â  Will social media be ammunition for an opposition?Â  How will the western world react?Â  I have heard 30 times today about the Nigerian soccer team being banned for 2 years by their president, but have yet to hear this story broadcast, even on the BBC.Â  At one time, there was a global concern for democracy in this country, a concern that profited the coalition handsomely.Â  Will this concern continue even in the absence of Sadam?Â Â  According to Kuwaiti law, it is forbidden to speak out against the monarchy, but is it wrong for the people to protest corruption of their democratic leader? Finally….Who’s taking the camel out for a midnight ride?Â