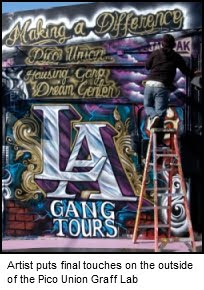 “I’m just an MBA living in LA” is the chorus for one of my new rap songs.  This city has given me more than it has taken in the 2 years I have lived here, and I am really fascinated with the inner-city culture that I get a glimpse of when I leave my beach neighborhood and explore.  Last week I taught my first high school class in a school in the Watts/Compton side of LA.  I was given just a day’s notice, and really didn’t have time to worry about spending a day in an area with 49% of the people under the poverty line and recognized around the world (thanks to rap music) for their gang violence.  By coincidence, I watched the movie “Dangerous Minds” the weekend before on TBS, and went into the experience with a willingness to teach a little karate or drop some Bob Dylan poetry like Ms. Pfeiffer.

As it turns out, Hollywood, the media, and Coolio had painted a picture of LA that I did not see that day.  What I did see was a brand new school, well behaved 17-18 year olds who were creative, energetic, passionate, and motivated to succeed.  They made the experience incredible for me, and really enlightened me on aspects of entrepreneurship that get missed in an MBA program.  I am excited to work with them throughout the semester to help them win a national business plan writing competition.

Today NPR featured a story that shows entrepreneurship causing controversy in this very neighborhood.  LA Gang Tours is a social enterprise that gives guided tours of the roughest parts of the city in a bus with former gang members.  They charge $65 per ticket, and tourists are taken to places that they would normally not feel safe going to alone, but like me, have had a certain picture painted in their minds through the the entertainment industry. Their tours have been sold out the last 5 months, and they make several stops, including the LA County Jail, the birthplace of the Black Panthers, and the birthplace of the Crips gang.  They stop at local businesses so that tourists can buy souvenirs, and supposedly donate a large portion of their profits back into the community to try to create new jobs, microfinancing loans, and other projects to help maintain a “cease-fire agreement” between the 3 major gangs in the area.

The founder, Alfred Lomas is a former gang member and has negotiated a deal with the gang leaders to keep gun free-zones for children to be safe in, and to keep the tourists safe on the trips.  The goal is to inform outsiders about this culture, help the economic health of South Central Los Angeles, and strive for peace.  Below is their explanation of how they keep tourists safe.

“5-10% of the gang population is responsible for 65-70% of all gang violence. LA GANG TOURS has access to the “5%,” those who have their fingers on the triggers. The participating gangs in the established gun fire free safety zones have agreed to allow LA GANG TOURS to operate in their areas, given our goals to hire their youth for employment opportunities and offer job and entrepreneurship training programs.
LA GANG TOURS has predetermined routes and times that are honored by each of the participating and opposing gangs. Every effort has been made, from the time of day to departure locations, to ensure a safe, pleasant and enjoyable tour experience.”

This story fascinates me, but I am not surprised to hear that certain community members are in complete opposition to this venture.  Some people view the tours as exploitation.  They argue that they are reinforcing negative stereotypes of the area, and taking advantage of  a group of people already going through hardships.   I admit that I thought of it almost like a jungle safari tour from the marketing.  However, after reading about the founder, I truly believe that this movement has positive intentions for the community, the tourists, and for peace in the area.  Perhaps I will take a date on the tour in the upcoming months.  Good idea?