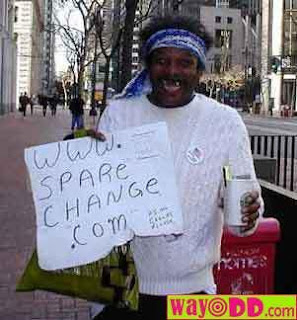 I knew this was coming….I saw it coming last year when my land lady brought a homeless person into our house, and he spent 12 of the 24 hours of the day facebooking.  I admit, it was a bit embarrassing that he had more facebook friends than I did.  Shortly after finding an exit to Thailand, he released a series of hilarious facebook videos of him singing justin timberlake songs…no joke.

Sites such as: Begslist, CyberBeg and DonateMoney2me.com all aim to give panhandlers a forum to beg for money.  Some of the sites, ironically charge up to $45 a month to be a member, but according to NPR, some of the appeals are very “heart wrenching.”

The problem I have with this is that there are enough of internet scams going on, and these forums just provide a new venue for these crooks.  Living in Venice, I deal with homeless people daily, and fortunately they all realized my modest wealth, and no longer as me for money.  But the truth is, I have a personal bias against giving homeless people money.  One particular homeless man in SF swindled my roommate into helping him out, only to steal my 2 week old laptop.  Either him, or the dozens of people that have bought or sold the laptop since, could be using it for begging on these sites.

However, for the hardworking families that have been hit the hardest by the economic crisis, perhaps some good can come out of this.  It is a bit more private, and less degrading than panhandling on the street.  Personally, I would prefer to donate money (if I had any) to a site more like Kiva, that gives microloans for people trying to start a business, however most of these sites help people in foreign countries. Helping American people keep their houses and buy their childrens books are very noble ideas too.

Just as long as its a scam.  At least they already have computers, and won’t try to steal mine again.