Food for thought â€“ via a truck 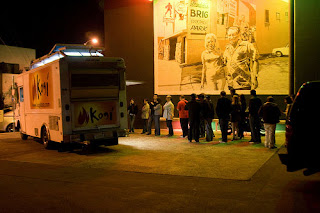 The social media guru, Mike Prasad behind Kogi BBQ spoke at my campus, and it was a fascinating perspective on how a start-up in a new industry can leverage the power of this communications channel to grow a business, and defend itself from large competitors.

The companies founders had noble intentions – to bring the street food culture from Korea to the streets of Los Angeles.  Once has resulted has been a revolution in the restaurant business, with 30 similar trucks, including a “masala dosa” truck in Santa Monica among other cuisines.  By using social media to have conversations that couldn’t take place in any other medium, the businesses can evaluate demand around the crowded city of LA to determine where to send their trucks.  People wait in line for hours for the food, musicians have been known to debut their new songs at the truck locations, and it has turned into a fusion of food and LA culture, while giving people access to a new cuisine of food at a very low price point.  As a driver in this city, I love the idea, considering I avoid driving places at any cost, and having a delivery truck possibly come to my neighborhood from collective demand, it is just a win-win overall.

In his presentation he mentioned fighting Baja fresh via blogs, tweets, and eventually proper journalism once thousands of people were tweeting about how Baja ripped off Kogi BBQ.  I haven’t been too fond of twitter historically, but his presentation definitely shed some new light on the site.  The strategic steps taken to protect a company that couldn’t afford lawyers to defend them from an unethical attack from a corporate machine was the highlight of morning.

Also – I am now following Kogi, so that I can catch their truck for lunch, because the food is indeed delicious.