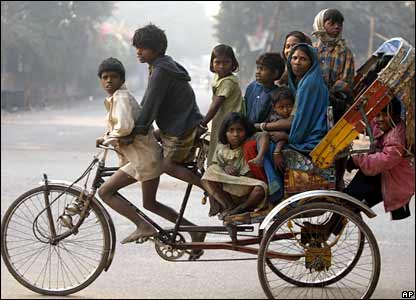 Sustainability has become a global buzzword. There are obvious trends with automobiles, hotels, manufacturing, and other sectors that drive companies to promote anything they do that helps the environment.

In India pollution is obviously a problem that the government is trying to control. Recently a list of the top ten polluting cities in the world was released, and 2 cities in India made the top 5. (Sukinda and Vapi). I have mentioned the traffic problems here, and as you can guess, over 70% of the pollution in the country is estimated to be caused by the vehicles. Interesting enough, there are only 7 cars owned for every 1000 people compared to western ratio where nearly 350-500 cars are owned for every 1000 people. With a growing middle class, India is estimated to add 2 million cars (passenger vehicles) to the roads by 2010. The manufacturers are marketing new cars that are as low as $2,500.

I can’t imagine what the traffic will be like in 2010 with sales of cars doubling per year. I have noticed that the government is slowly trying to control the traffic. Last week the 100,000 auto-rickshaws were on strike in Hyderabad. In 3 days the government has caught over 1000 of these 3 wheeled taxis having tampered meters, and is looking to enforce digital meters as a consequence. Even if the meters are installed free of cost, the drivers are refusing to install the meters. They are also demanding to carry 8 school children instead of 6.

Some people think that the move is a subtle move to get these vehicles off the roads. A proposal was recently introduced to replace all auto-rickshaws with taxis to ease traffic congestion by offering 4 year loans with cheaper interest rates. The private sector is also trying to help the cause by introducing a car that runs on air.

But, one of the more comical stories I have heard in on this topic is an initiative being taken to promote cycle rickshaws. Since fuel prices in India are insulated from global crude prices, Indian Oil Marketing Companies (OMC) lose money everytime a sale is made. Public sector oil companies are losing Rs. 240 Crore per day, or $1,546,804 as a result. Private sectors apparently are still free to charge what they want, but their pumps have been shut down by “predatory pricing from public sector OMC’s.” Satya will tell you that the lines at the pumps are very long these days.

Now…here are the details to the solution called Indivelop, which the OMC’s are promoting. They will themselves adopt the cycle rickshaws (different than auto-rickshaws), redesign them while employing riders who will be properly uniformed, groomed, and given social security, shelter, health care and a savings account at no cost. The rickshaws would generate extra revenue by selling advertising slots on the vehicles, uniforms, and rickshaw stands. Riders are going to have to obtain a license to operate these vehicles, and they are looking at creating battery operated rickshaws as well. Kramer might have been on to something….